This vol. is on Wano Country.
The Piece of Dream is about the fantastic collaboration of that two characters.

The Cover Artist for Chapter 3 of Law Novel is Kim Jung Gi, Korean Artist !
And the Vol.6 of OP: Magazine is about Wano Country, in Manga & Anime with some features !

-With the“Piece of Dream”, the strongest collaboration between that two becomes reality?!
-One Piece novel LAW
-An interview with the new director of the anime Wano country arc, Tatsuya Nagamine!!
-Commentary of the blades related to the world of OP “Blade Illustration Quire”
-Complete collection of all the foreshadowing that leads up to Wano country!!
-Reading One Piece with Rakugo: Wano Country edition
-Keywords for enjoying Wano country “Traditional cultures X Wano country"
-The visuals that was at the Daikaku Temple exhibition “The Demonic Beast and the Princess and the Flower of Oath”
-celebrating the 20th anniversary of One Piece anime, The meeting of the Strawhat voice actors vol 1
-The vigorous young actress, Makoto Tanaka’s high quality Robin cosplay
-The forward of Kawasaki, Kengo Nakamura, will speak of the love for One Piece
-The picture book to play with your family “One Piece picture book Luffy’s big adventure” final chapter!!
-extra chapter for “Fischer’s X One Piece Seven Big Treasures in a row”!!
-collaborations with the super popular app, “Treasure Cruise”!!

Cover for 3rd Volume of Novel Law, made by Kim Jung Gi ! 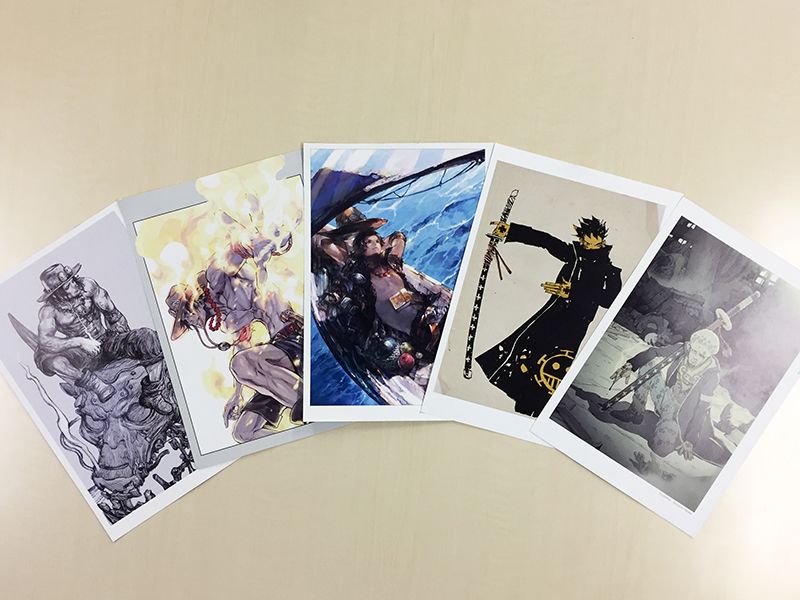 “Zoro being the user of Gomu Gomu fruit, and Rayleigh laughs at him while Zoro struggles”

Zoro is the user of Gomu Gomu fruit! That’s very interesting so I drew it, but when I actually draw it ended up being different from the funny scene in the request, I drew Zoro using it without a problem, now no one’s able to laugh at him. I think that’s fine!!

→That reader wanted to see Rayleigh! Because of opinions like that I drew this.
“Huh—! They are entangled!! Wahahaha!! So funny”

Oda illustration of One Piece x Kyoto Collabration in 2017 for 20th Anniversary! Full Pic and HQ in OP Magazine Vol 6 !

The top one is Kanjuro’s and the others are Raizou’s designs…..or so we thought. But about half of them are designs for Kanjuro! As Oda changes and perfects his design for Kanjuro, he ended up using parts of it to design Raizou, which are the bottom 3 drawings

The swords next to Ryuma are, from left to right, Sandai Kitetsu, Yubashiri, Wado Ichimonji
“To catch up to his legend, various sword styles were created in the Wano Country, many of which are secret techniques that were forbidden to outsiders. One of them can cut strong iron, one is said to be able to cut through the flame of dragon. It’s been several hundreds of years since Ryuma’s death. Perhaps a strong samurai who people can called the ‘second Ryuma’ has already been born.
Strange rumors regarding Ryuma have been spreading around in recent years, it is said that the body of the master swordsman Ryuma and the national treasure meito Shusui has been stolen by someone. 23 years ago, when a certain pirate was causing commotion in the Wano Country, Ryuma’s grave was desolated and the sword and his body disappeared. No one knows the whereabouts of the body and sword, and the samurais who respect Ryuma went searching frantically for the criminal who did it.”

“It is said that Kaido is the ‘strongest creature’ among all living thing. Even though we have no information on what race he belongs to, he have a huge body like that of Giants. The strength of his body is also extraordinary, if you try to pierce him with a spear, the spear will break.
The above is the information of Kaido that the public commonly know, but I witnessed Kaido himself in Kuri. He’s a user of devil fruit, and a mythical one as well, he transformed into a huge dragon. The moment I set my eyes on him, my body got stiff and I thought I was going to die. How intimidating. He’s on a whole different level than human. One can even say that he’s a ‘monster’ that surpasses human wisdom.”
Translated by EtenBoby/KaidoBoby.

Anyone who sails in the New World knows that there’re certain pirates that you should never go against. The Emperor(s) of the sea, the “Four Emperors”—“RedHair”, “Big•Mom”, “Blackbeard”, and who we are about to talk about now: “Kaido of the beasts”.
The Absolute Force
Beast Pirates
Captain(General): Kaido of the beasts

It is said that Kaido is the “strongest creature” among all living thing. Even though we have no information on what race he belongs to, he has a huge body like that of Giants. The strength of his body is also extraordinary, if you try to pierce him with a spear, the spear will break.
The above is the information of Kaido that the public commonly know, but I witnessed Kaido himself in Kuri. He’s a user of devil fruit, and a mythical one as well, he transformed into a huge dragon. The moment I set my eyes on him, my body got stiff and I thought I was going to die. How intimidating. He’s on a whole different level than human. One can even say that he’s a “monster” that surpasses human wisdom.
Member List
With Their Overwhelming Power They Force the Strongs into Submission

It is said that no one can defeat Kaido one on one. A number of people who were confident in their strength challenged him, but most of them ended up laying on the ground after a single swing of his “kanabo”. As a single human, his abilities are on a whole different level…!!

Breaking the Spirit of their Opponent and Obtain New Subordinate
Kaido, after completely crushing his opponents, throw them into the Prisoner Mine, and force heavy labor upon them under surveillance. They can’t even have a proper meal, but would have to work continuously. This hardship will go on until they realize how meaningless it is to oppose the Beast Pirates and fall under submission.


A Reign of Fear by the Three “AllStar”
There are three executives who are like the embodiment of Kaido’s thoughts. They are called the “AllStars”, and like Kaido they have a huge body, they have unwavering confidence in their strength and uses power to control everything.
Once their lord, Kaido, gives the command, they perform it as if they’re his limbs. Anyone who gets in the way shall not be forgiven, they destroy everything like a raging storm and complete the mission. The only one they fear is their lord • Kaido.

Jack leading his fleet and attacks Zunisha. Even with Zunisha, who’s big enough to carry a country on its back, as his opponent, Jack attacks without any hesitation. He never considered the possibility of him losing, not even once.AllStar: King the Wildfire

He’s like the eldest son of the AllStars, holding the epithet of “King the Wildfire”. He enjoys torturing the enemies that they caught and forcing them to talk, which is why Queen call him a “pervert”. He is a user of an ancient type of devil fruit, and can transform into a giant pterosaur.
AllStar: Queen the Plague

His agility is unimaginable for his massive body, he’s commonly known as “Queen the Plague”. He’s in charge of the Prisoner Mine in Udon, Wano. His job is to break the spirit of their “former strong foes” and make them join the Beast Pirates.
AllStar: Jack the Drought

Even though he’s the youngest little brother of the AllStars, he’s a monster with a bounty of one billion berries. He does not make compromises in anything, when his needs are not met, he will force his way through. It is said that after Jack passes through a land, it will be left in a decaying state as if suffering from a drought.

The Working Troop that Carry out Kaido’s Orders
The AllStars only moves when something important happens, normally the troubles will be solved by those under them, the Headliners, who leads the Gifters and Pleasures. Most Headliners are users of the artificial devil fruits SMILE, there’re also quite a few who used to be their enemies.

I am known as NoxDRaz over the internet. I love ONE PIECE and I have been following it for more than 15 years. Get in touch with me on [email protected]
Tags: One Piece Magazine Vol.6

I am NoxDRaz and I made this site in 2018 as a dedicated space on the web for the famous ongoing manga and anime 'ONE PIECE'.
Over the years, I have enjoyed making and sharing Weekly Chapter Reviews, theories, translating Novels, Magazines, and Vivre Cards.
But sadly, I am no longer able to continue doing this.
In the past few months, I was really busy in my Professional life so I couldn't post much content.
And now that I have some time, I have no motivation to keep doing this.
Maintaining a site on the web also costs a lot of money and I am not really getting anything in return from my heavy investment in this site.

So, due to the lack of resources (mostly money and time), I have decided to shut down dawnofonepiece.com after 6th June 2020.
If you want to download or save some information from the site, then do it before 6th June 2020.
Thank You!